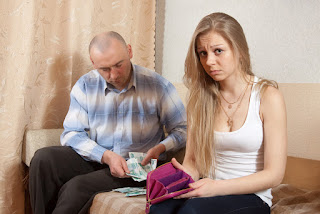 There is a type of domestic abuse that is getting more and more attention these days:  financial abuse.  In some relationships, financial abuse exists even when other forms of abuse do not.
Financial abusers gain power and control by limiting their partners’ access to cash and other assets or by concealing information about finances.  It is one of the most powerful methods of keeping a victim trapped in a relationship and greatly reduces her (his) ability to subsist after leaving.  Survivors report that concern over their ability to provide financially for themselves and their children was a major reason for staying in or returning to an abusive relationship.
Common methods used by financial abusers include:
·         Controlling how all of the money is spent & not allowing the victim access to bank accounts
·         Withholding money or giving “an allowance”
·         Refusing to pay bills and ruining the victim’s credit score
·         Forbidding the victim to work or refusing to work or contribute to the family income
·         Running up large amounts of debt on joint accounts
·         Not including the victim in investment or banking decisions
·         Hiding assets
·         Stealing the victim’s identity, property or inheritance
·         Evading child support or manipulating the divorce process by hiding or not disclosing assets
Those who manage to escape financial abuse often face overwhelming odds against success.  Ruined credit scores, sparse employment histories, and legal issues caused by the abuser can make it difficult to gain – and maintain – independence.
Posted by Unknown at 10:27 AM